Well greetings all…..thought I would update you on the last few days!
I have to say its all been rather chilled and relatively uneventful! No dead animals, no stories about spices with magical properties and no elephants in gardens!
Friday saw me having a lazy day which started at 10am with a breakfast of mango and orange then a lazy stroll around Fort Kochin area. At 5pm I wandered over to the Kathakali centre to watch a dance performance. This traditional Keralan dancing is not everyone’s bag, when I say dancing I am using the term loosely! Its more like rapid eye movement, stamping of feet and waving of hands! However, I have always wanted to see a performance and wasn’t disappointed!
Shirley and I took our seats and watch the performers applying their makeup/face paint for an hour which was impressive considering they had papier-mache cheeks glued onto their faces! Then the narrator introduced us to this art of kathakali dance with a demonstration of how they act out each emotion. To be fair its quicker to speak than kathakali dance it!!! The dance display for angry lasted approximately 25 seconds!
The performance had 5 scenes and each one was described by a one liner! i.e scene 5 simply said ‘Situ goes to Siwa to ask for forgiveness and she forgives him’  now that is 12 words! That scene took 15 minutes to act out! Impressive!
Anyway we thoroughly enjoyed the dance and managed to sneak backstage to get some pics with the drummer and dancers! 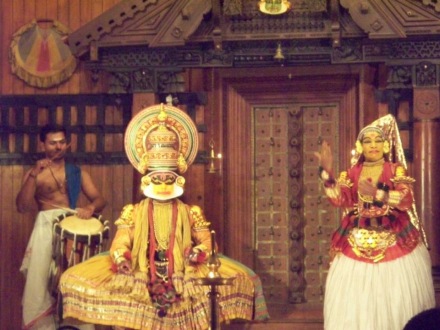 After the show we dropped by the Thali concrete box ‘restaurant’ and had a masala dosa and coke, all for the princely sum of 80p!
Saturday saw me, again, get up at 10am and dine on mango, orange and banana. Then I took a 30 min walk to Mattancharry to see the Dutch Palace.  Standing in the roasting heat in the queue only to find an english lady behind me, got chatting and turns out she is from Eastbourne. Talk about small world!
Anyway wandered around with her taking in the wooden painted murals and poorly preserved maps drawn by the dutch. Someone should really give the indians a lesson in preservation! Paper maps framed behind glass and hung opposite windows will not be maps for long! Half of them are blank sheets of paper!!
Anyway left the lady from Eastbourne at the exit and bumped into Shirley. We then wandered back up Palace Street in the direction of home. Popped into a ‘popular with locals’ bolthole for some food. Masala dosa and coke….44p! Bargain! On the way back I bought a small pineapple and noshed on that whilst reading and chilling under the fan!
Saturday night myself, Ozzie Jeff and Shirley went to a Tibetan Restaurant for some food, it was highly recommended by the locals! I had the house speciality of momos which are veg dumplings, amazing!
Yesterday saw the departure of Shirley, she took a train further south to a catholic ashram retreat for 5 days, where once you are in you are in! No escaping or leaving early! The days are filled with 5am starts, meditation, silence, prayer and fasting! Sounds bloody awful if you ask me!
So Ozzie Jeff and I took off to the beach, again using that term loosely! We sat on a bench on a very english promenade watching the indian kids swimming and playing on the beach. Loads of indian families were eating ice creams and strolling along the beach. I half expected them to roll up their trousers, put a hankie on their heads and fold out a deck chair!
Anyway managed to see a few dolphins swimming just out from the beach which was a surprise. Who wants to pay loads of money to swim with dolphins in exotic places when we can swim in the sewage filled Arabian sea coastline of India for half the price! I am thinking money-making opportunity here…..
After the beach we did a walking tour around Vasco de Gama square, St Francis Church ( no relation) and the dutch cemetery which was locked up, overgrown and eerie!
This then takes me to this morning! Early start….well 7am! Packed, scoffed a banana and orange and jumped in tuktuk to the station!  Jumped on the 16041 Alleppey Express and found my seat in the AC 2nd tier carriage! Pretty much had it to myself for the hour and a half journey. Spent the time watching the backwaters and rustic villages pass me by before disembarking at Alleppey.

Mathew, the owner of Brown’s Residency met me and paid for a tuktuk back to the homestay.  What can I say….homestay is the word! I am basically staying in my own house! It belongs to Mathew’s auntie who works in Dubai. It’s a huge 3 bedroom house with lounge with cable tv, full kitchen, terrace garden. My room is four times the size of the one last week and has its own huge balcony. There is no one else staying at the moment apart from me, so I am lady of the manor!
Anyway am waiting to find out if I have got on a 12 day tour of Kerala which starts in Kovalam on Wednesday. Fingers crossed I have…..will keep you posted!

So I am back with some more ludicrous travel plans for the next 18 months. It’s been a bit quiet on the travel front since I returned from South Africa […]
Forty for Forty

So my next stop on this weird and wonderful world tour sees me get off in Taiwan. A place I have visited, briefly overnight previously but have never made the […]
Temples of Taiwan

So continuing on my random jaunt around the world…my next pitstop sees me spending some time in Bangladesh. Whilst not on most people’s radar, Bangladesh has been on mine for […]
Beautiful Bangladesh – March 2019

The next stop on my solo travels around random places […]
Planes, Trains, Automobiles and dog napping in Sri Lanka – February 2019

Well, here we are again….if you read my last blog post you will know that I left Africa late January and popped home for my birthday and to spend some […]
February Travels – Budapest

So we left off with us hurtling through Liberia in a Nissan Micra that belonged to the border guard. We were planning on heading to Robertsport for a day or […]
Liberia, Ghana & Ivory Coast

Our first day in Sierra Leone was a very, very long one. It began with us leaving Conakry in Guinea at 5am in a luxurious minibus with Barry our local […]
Celebrating the New Year in Sierra Leone
%d bloggers like this: