The Gambia – it’s not all package holidays!

So we left off in the last blog with us heading towards The Gambian border, the border was relatively straightforward, however, the drive to Sukuta was slightly less straightforward and involved driving through Banjul, jumping on a ferry across The Gambia River before fighting through the markets of Serekunda before finally reaching Sukuta and the Senegambia area where we were staying.

The truck drove around and around looking for the campsite so Nicole and I jumped off the truck on the side of the road and hitched a taxi to our hotel. A few of us had upgraded into beachfront hotels for the time there. Little holiday from the truck! Again! Lol

Within 15 minutes of leaving the truck we were logged into the WiFi and ordering dinner from the hotel’s menu. Small luxuries!

Saturday saw us have a well earned lie in and a lazy morning WiFi-ing until we went for a walk to the hotel next door for lunch.

We enjoyed a pleasant lunch then wandered back along the beautiful beach to our hotel and a spontaneous spot of dog sitting! As you do! Paula (hotel sales manager from Oxford) went shopping with Richard (hotel manager from Cheltenham area) so needed someone to look after little Teddy for half an hour….of course I was going to offer! 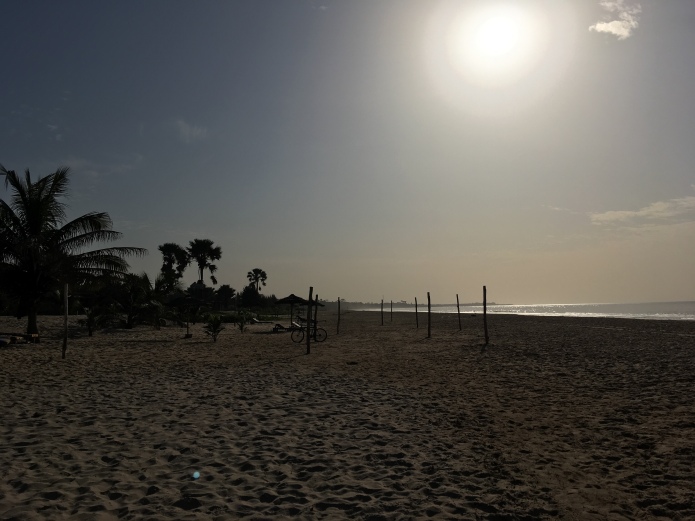 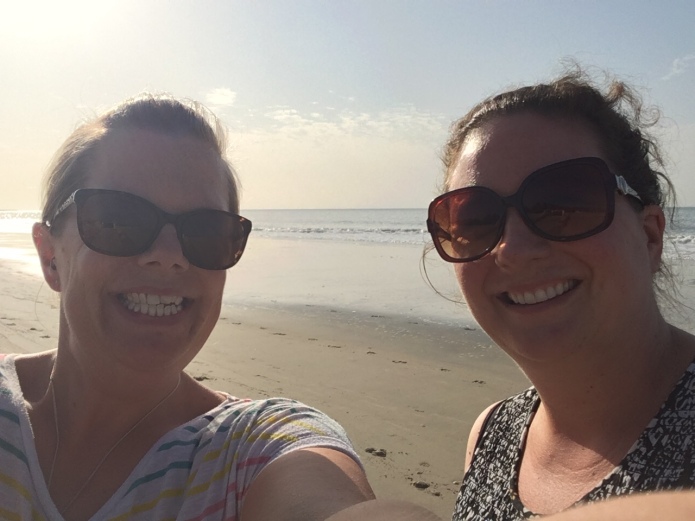 After dog sitting we had dinner and welcomed Richard and Rhona to our hotel as Paula had organised a nights of local entertainment. We had a Djembe drumming troop who also danced as well, was bloody brilliant especially as they let us have a go at drumming after! I asked if I could join their troop and travel around playing the drums but they politely declined! Shame as I reckon I am pretty good! 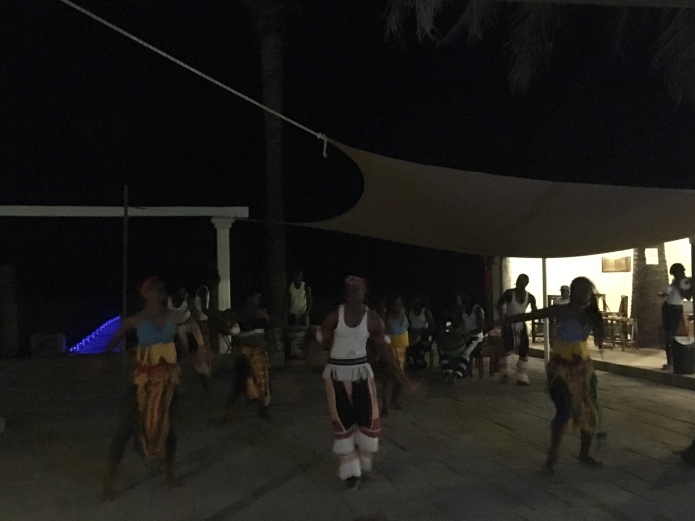 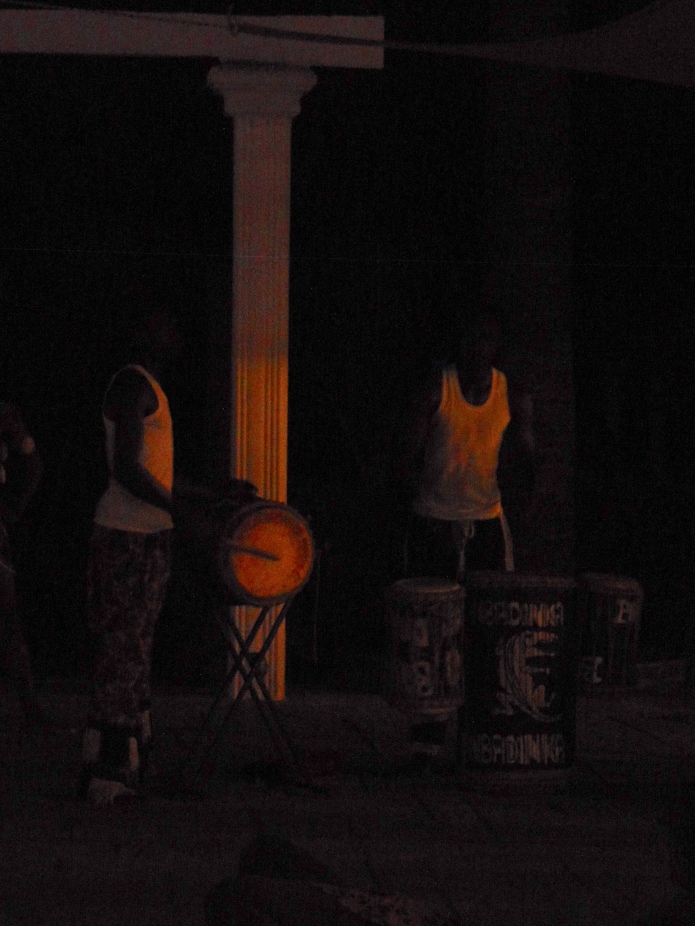 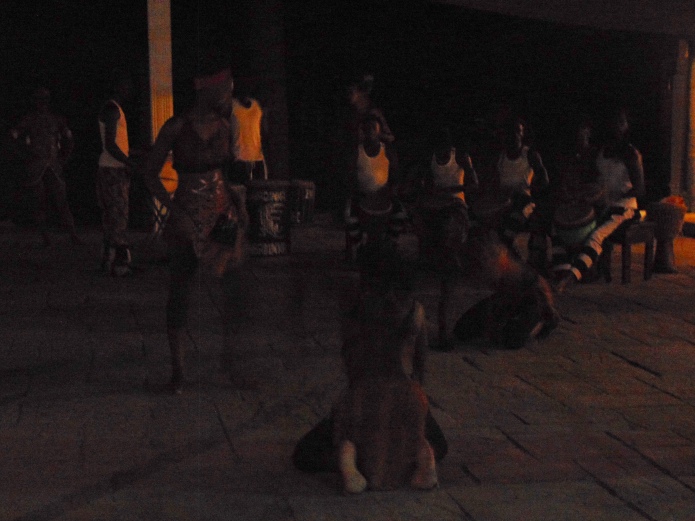 Sunday was a brilliant day, we headed out with a well known local guide called Smiling Bob, he took us into 3 Gambian villages to check out a famous art installation called ‘Wide Open Walls’. Wide Open Walls is an intercultural art project aiming to raise awareness of the need for peace, understanding and respect. The original artists experienced village life in The Gambia whilst aiding the local community. The project started in 2010 in Makasutu village and then Galloya soon afterwards. It’s a fascinating thing to visit, even though the murals are fading and the buzz around them gone…its still a fantastic thing to see and spend sometime with the kids in the village.

You can read more about the artists involved and the project here http://www.widewalls.ch/wide-open-walls-of-gambia-mural-project-2014/ 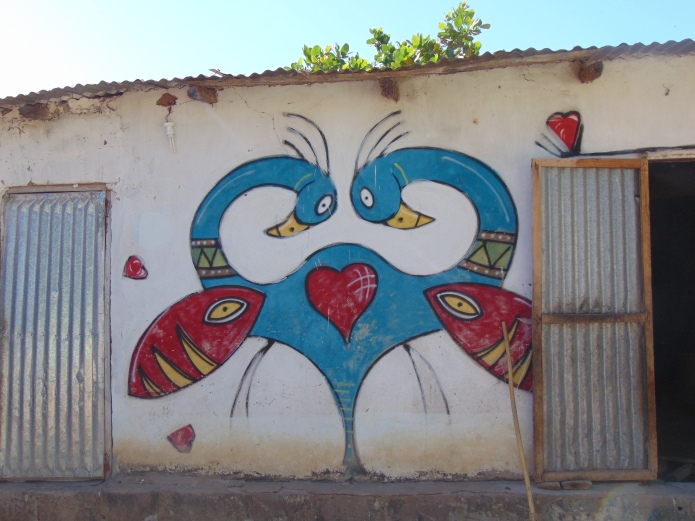 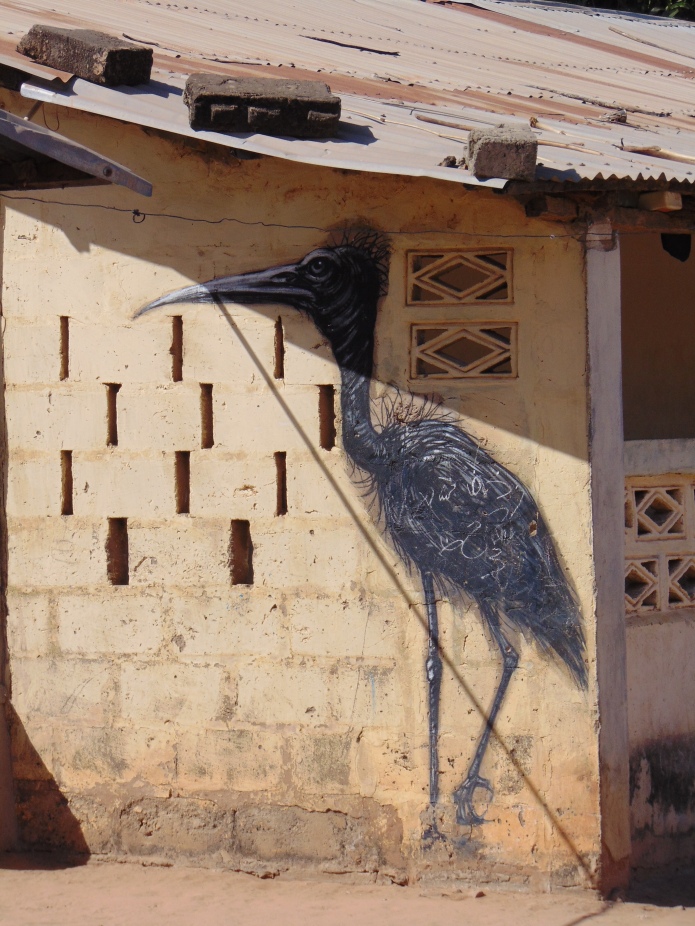 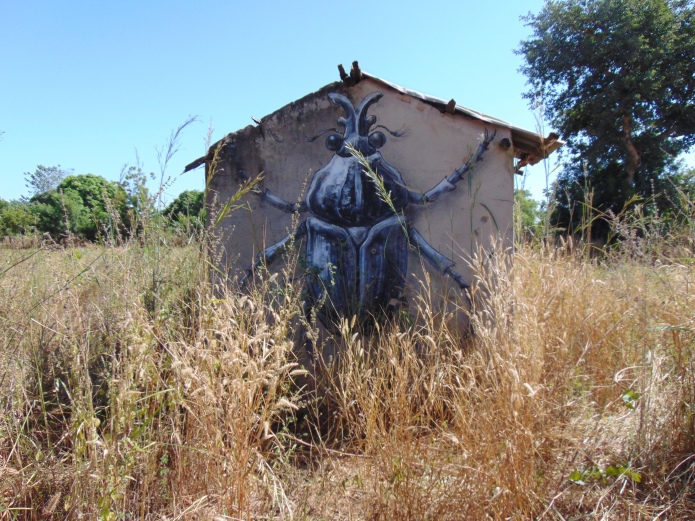 After the villages we headed to a lodge on the river Gambia for lunch where you get attacked by monkeys whilst eating! You are provided with large sticks to bang on the table and frighten the monkeys so they run off! Can’t say I was convinced by this protection device but hey! We walked in and there were monkeys in the kitchen creating havoc…we could hear pots and pans being thrown around everywhere, how the lady managed to cook edible food and run an efficient restaurant was beyond me! Thankfully Bob took control of the stick and we weren’t hassled by monkeys too much…some other guests next to us decided to aggravate a monkey by giving it some beer in a soft drink bottle….monkeys love sugary drinks but hate beer…they thought it would be a laugh to see what happened…well the monkey played dumb for a bit then launched himself at their table and stole a whole sandwich! Ha in your face monkey aggravators!

Bob then took us out on a pirogue with a couple of local cool dudes, we pirogued about for an hour taking in the bird life and mangroves. 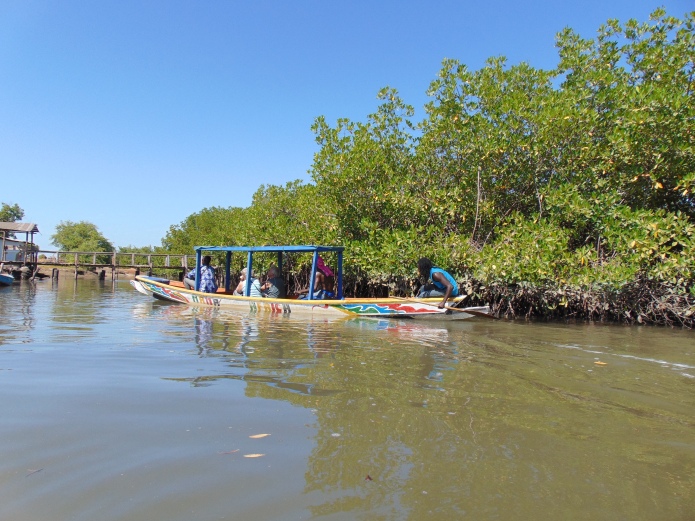 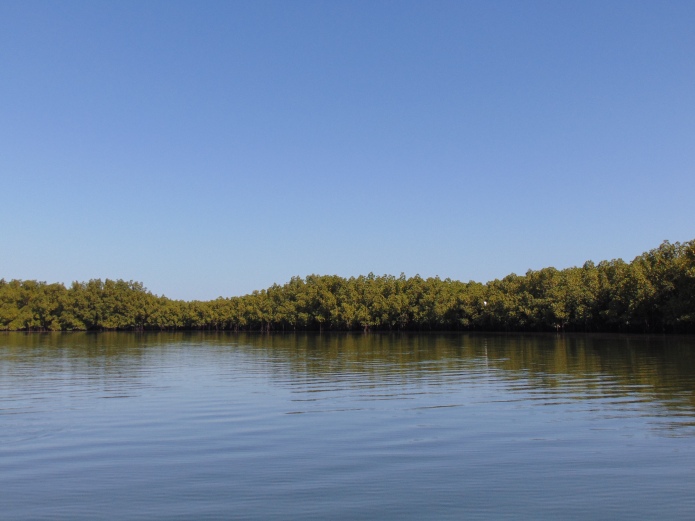 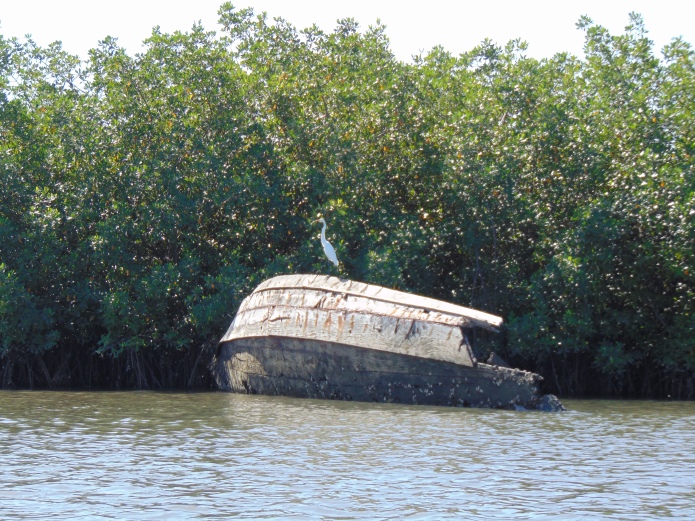 What a fab day, I felt like I had really got under the skin of The Gambia and seen something much more than Senegambia, the package holiday crew and the beaches.

Saying that Monday, after a brief visit to the Guinea embassy, involved us sitting in a resort beachfront bar and eating and drinking all afternoon in the sun, we had a brief interlude to go back and collect our visa mid afternoon but other than that it was sheer package holiday vibes!

Tuesday we had a lazy morning, walked up the beach to Richard and Rhona’s hotel and met some of the others there. We just sat drinking, eating and chatting by the pool all afternoon. Very relaxing and definitely not what we envisaged when we signed up for a tough overlanding and bush camping trip!!! Haha 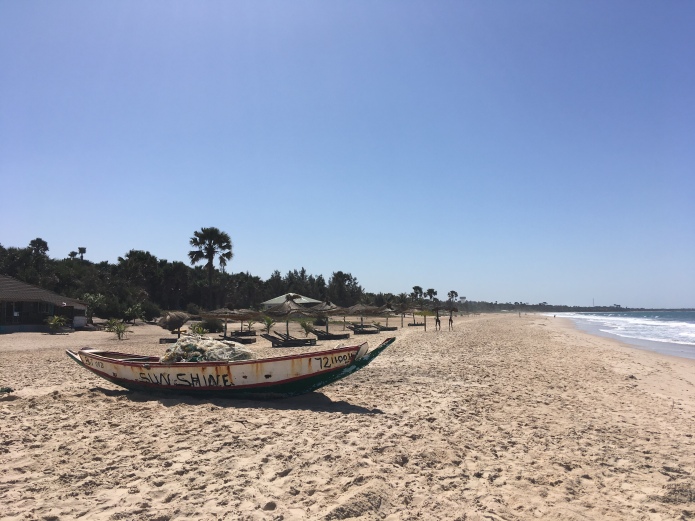 Nicole and I wandered back around sunset and headed to Leo’s next door for dinner, just to mix it up! The sunset was stunning! 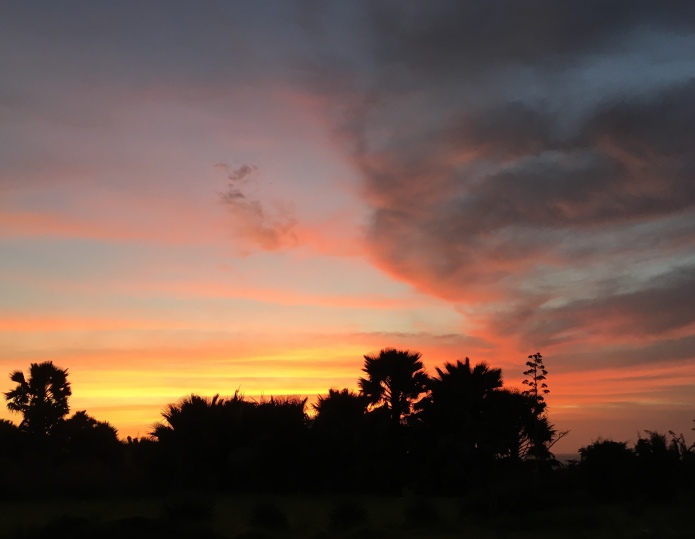 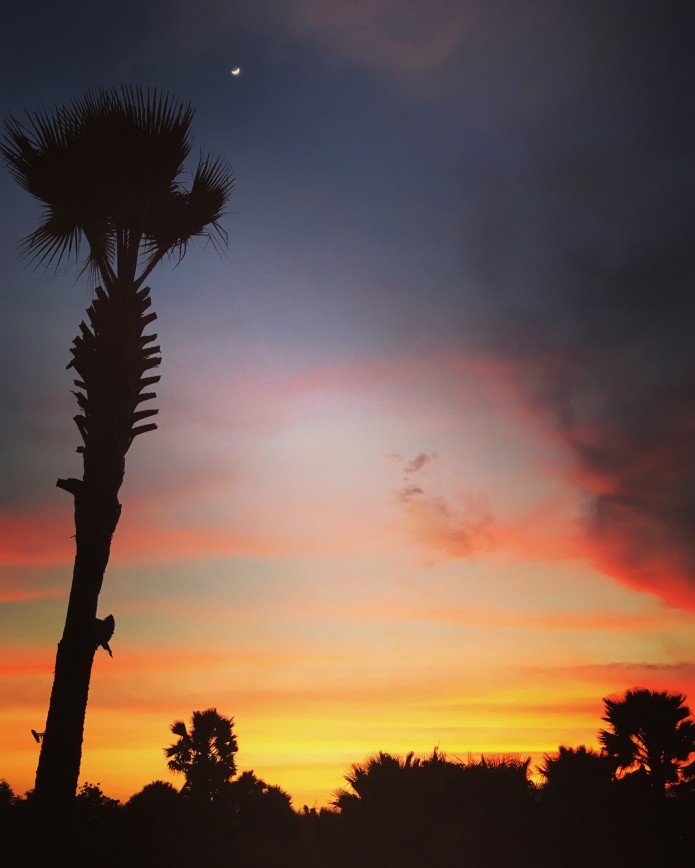 Wednesday we were supposed to be leaving, however, we were waiting on 2 new members to join the tour so we were unable to leave. So our holiday got extended by a day and night!

We made the most of our day by walking for an hour to Senegambia, meeting some of the group again and sitting in the package resort eating and drinking all afternoon.

We then went to grab a taxi but found all the roads closed as the President was shortly going to be coming through in his motorcade. So we stood with the locals and waited….a few minutes later there was the roar of motorbikes and armoured vehicles before the President came through waving at us.

Nice end to our time in Senegambia and Sukuta.

I was incredibly sad to be leaving the peace and calm of Ocean Villa Heights, it was such a haven for us and gave us a brief glimpse of normality for a few days. Can’t recommend it enough!!

Thursday saw us get up early and get a lift to camp to rejoin the group and the truck. Richard from Ocean Villa Heights very kindly gave us a lift there…we had the stereo on in the car and The Clash’s ‘should I stay on should I go’ came on. Surely a sign….although I am not a fan of Senegambia and the package holiday fraternity…our slice of heaven at Ocean Villa Heights was hard to leave behind especially little Teddy (who I was contemplating dog napping…..sorry Paula!!! Haha)

Hoping to head back to OVH again at some point for a few days chill out again soon!

Anyway…we did leave and move on by 40km to an eco lodge called Tumani Tenda where we then spent 2 days chilling out in a roundhouse with no WiFi or power! There were a host of activities available such as soap making, forest walks, village tour, cooking and oyster farming.

It was a total chill out for a few days really….not that we hadn’t chilled out for the last week!! Still all monies went to the community who all manage the eco lodge and benefit from it…its a good sentiment and we were glad to be able to help in a small way.

We upgraded…if you can call it that…to half of a basic hut with just 2 beds and mosquito nets. It’s not all luxurious hotels you know!!!!

That evening the women from the village came down and danced for us…it was all very frenetic…drumming and stamping and dancing. We all had chance to join in and have a go… 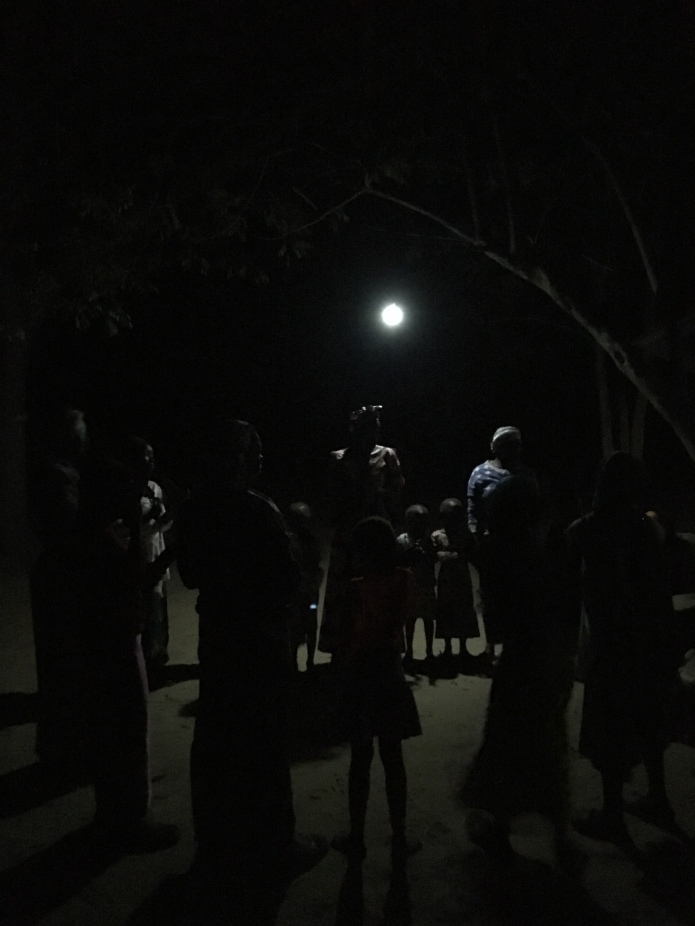 After Tumani Tenda we headed back into Senegal and the Casamance region in the south where we would stay on the beautiful beaches of Cap Skirring before heading to Guinea Bissau.

Stay tuned for that….

So I am back with some more ludicrous travel plans for the next 18 months. It’s been a bit quiet on the travel front since I returned from South Africa […]
Forty for Forty

So my next stop on this weird and wonderful world tour sees me get off in Taiwan. A place I have visited, briefly overnight previously but have never made the […]
Temples of Taiwan

So continuing on my random jaunt around the world…my next pitstop sees me spending some time in Bangladesh. Whilst not on most people’s radar, Bangladesh has been on mine for […]
Beautiful Bangladesh – March 2019

The next stop on my solo travels around random places […]
Planes, Trains, Automobiles and dog napping in Sri Lanka – February 2019

Well, here we are again….if you read my last blog post you will know that I left Africa late January and popped home for my birthday and to spend some […]
February Travels – Budapest

So we left off with us hurtling through Liberia in a Nissan Micra that belonged to the border guard. We were planning on heading to Robertsport for a day or […]
Liberia, Ghana & Ivory Coast

Our first day in Sierra Leone was a very, very long one. It began with us leaving Conakry in Guinea at 5am in a luxurious minibus with Barry our local […]
Celebrating the New Year in Sierra Leone
%d bloggers like this: